MIT Enterprise Forum Pakistan and ITU conducted a well-planned two days event, Startup Lahore, to provide a grand platform for the entrepreneurs of Pakistan at Arfa Software Technology Park, Lahore on 26th January 2017. The main idea behind this event was to give a boost to startups and make Lahore recognized as the technology hub of Pakistan. 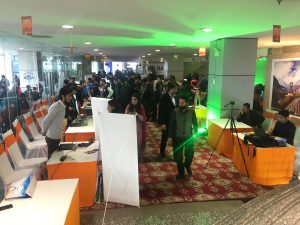 Along with the sessions, communication workshops were conducted for students of High school by Sana Khalid, Program Manager of Lincoln Corner that consists of an exciting Marshmallow and Lego challenges for the students.  Saad Mahmood 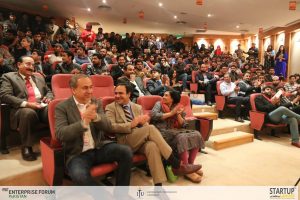 a Windows Development MVP from Microsoft organized two sessions; ‘A Review of Xamarin for Mobile Developers’ and ‘Microsoft Bot Framework’.  Khizr Tajammul from The Social Innovation Lab, a social enterprise incubator at LUMS held a seminar on ‘Design Thinking for Entrepreneurs with an Impact’. The session prime goal was to help students understand social entrepreneurship through design thinking. IDG led a comparative analytical session on ‘Startups vs Scaleup’ with an respected panel which included startup co-founders of MangoBaaz and XGear, angel investor Mr. Humayun Mazhar and industry professionals such as Ayub Ghauri. This panel was moderated by Ms. Aqsa Tariq. To conclude Day 1, Mr. Badar Khushnood, Partner at Bramerz organized an interactive session on ‘Growth hacking and Digital Marketing Trends’ to a full auditorium.

Apart from the enlightening sessions, enterpreneurs got their chance to display their products in exhibitions on the ground floor of Arfa Software Technology Park.  Careem, Orient, British Council, Fatima Ventures and Bookme.pk were some of the startups who set up corporate pavilions to gauge the impact they were having on the startup economy. Snacks were served by Maro Tandoors, Simply Sufi and Latteria Mozzarell. The official drinks partner for Startup Lahore was Pepsi, who sent over 2000 bottles for everyone who attended. Conveyance was made easier by Careem Pakistan as they offered a two day promo code (StartupLhr) for Rs. 200, for everyone coming to Startup Lahore. Fatima Ventures, a seed stage investment funding house in Lahore, was Startup Lahore’s lead event sponsor and Bookme.pk, an online ticketing platform, were the official website partners.

Day 1 concluded by announcing the startups that will get the opportunity to pitch their business ideas to a panel of esteemed judges and win cash prizes. Some of the finalists were StocksFM, Chef Chalet and Car Butlers. Day 1 marked to be a successful day for both investors and startups as they got their chance of mingling and circulating ideas. The air was charged with anticipation and excitement. . The Director for PlanX and MITEFP, Hafsa Shorish ended on a note of gratitude for all who could come to celebrate the Pakistani eco-system.

Unlike Day 1, Day 2 was a closed event by invitation only held on 27th January. On one hand, an investors training session for EO Lahore members took place where the investors expressed their expectations from startups. On the other hand, a 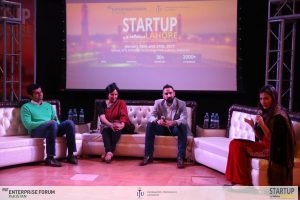 panel discussion was being held on ‘Pakistan: An Emerging Market’, where renowned names talked about their views and expertise on the ever changing trends in the technological field. Mr. Mudassir Sheikha, co-founder of Careem, Mr. K
hurram Jamali, Industry Head Google APAC and Asha Jadeja Motwani, Silicon Valley Venture Capitalist discussed about their notable experiences on entrepreneurship and growing market trends in Pakistan. The panel discussion was moderated by Ms. Hafsa Shorish, Director at PlanX | MITEFP. The US Counsel General Yuriy Fedkiw also joined in as an attendee at the panel discussion.

An important point addressed in the discussion was the difference between emerging markets to the established one. Asha Jadeja Motwani expressed that, “The opportunity here is that the emerging markets are significantly different. This is true across the border between the Indian, Japanese and Brazilian markets. This shapes its own temptations. There are lots of clone companies, you don’t need to reinvent the wheel but rather tailor something to your market.” 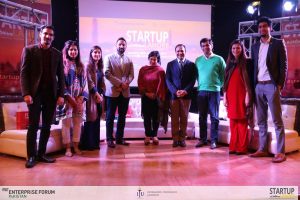 More common problems were also talked about which included family 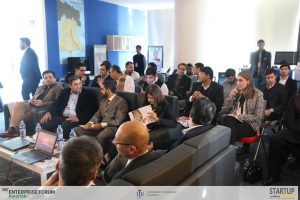 hesitations on starting something new and different. Many people in the audience could relate to such problems as they are the norm in Pakistan. Mudassir Sheikha too faced glitches while starting Careem as his family deemed it a mere texi business.  Later, the panel was joined by Dr. Umar Saif, Chairman of MITEFP, PITB and Vice Chancellor of ITU who applauded all the young entrepreneurs and the outstanding panel itself.

Then the time came that all startups were looking forward to; the Startup Rumble competition. The competition was about entrepreneurs pitching their business idea to compete for cash prizes. Over 220 applications were received out of which 85 were shortlisted after an online round of voting and application screening by the initial panel of judges. The applications were thoroughly reviewed. Out of the 85, a further 20 were selected who were the finalists. These top 20 startups pitched their idea in front of a panel of judges and a packed crowd at the Startup Rumble Competition. The competition was able to successfully incorporate the value of technology, innovation and entrepreneurship in Pakistan. Startups gathered from all over Pakistan including Islamabad, KPK, Multan, Hyderabad and Wah. The winners of the first prize at Startup Rumble were a startup name 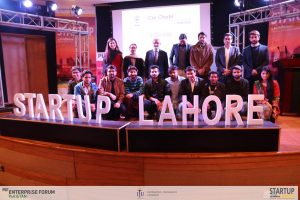 The two day event wrapped up with satisfaction for achievement of its goal. Director for PlanX and MITEFP, Hafsa Shorish, concluded by saying, “Startup Lahore-a humble effort towards celebrating and promoting the startup ecosystem of Pakistan. Startup Lahore was a brilliant display of dreams, hard work and courage coming together. Thanks to everyone who made it possible, especially our event sponsors Fatima Ventures!” 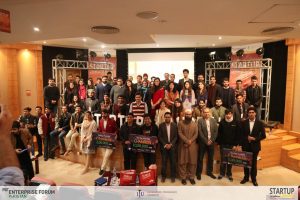