On 29th April, another successful event was held in Karachi by Pakistan E-commerce Consortium at their headquarters. The event’s prestigious supporting partners were CallCourier, Buyon.pk and Apex solutions, without them the event would not have been possible. FreshStart was the official Media and PR Partner for this meetup.

CallCourier was established in 2003, since then has been working its way all over the country and abroad. Its aim is to serve the needs of millions of people across the nation, apart from the corporate world. The company is successfully operating through the dedication of its professionals who are trained to do their specified job with utmost commitment.

The event started off with introducing attendees to each other. People belonging from a diverse e-commerce background were present; from e-stores owners, market representatives, to logistic companies and service industries. After the introductions were made, Anum Kamran, Founder of Pakistan E-commerce Consortium, had a fireside chat with Umar Qamar, Founder of Export Leftovers and the guest of honour of the meetup. He talked about how he started Export Leftovers from the leftovers of his family business of textile, the challenges he faced along the way and how he overcame them. Adam Dawood, CEO of Yayvo, and Shayan Tahir, CEO of Homeshopping.pk also attended the event.

Pakistan is still familiarizing itself with e-commerce, with new challenges arising every other day. Some of the issues and problems were discussed in this conference. One of the major hurdles in the growth of e-commerce business is ‘Cash on Delivery’, in which the store owner suffers the most. Due to poor performance of the logistics, the store owner is not able to benefit from their sales ideally as they should. CoD cannot be easily eradicated from this country until a standard trust is established between the buyer and the seller due to many false sellers scattered on the web. A discussion was held in trying to figure out a way to reduce, if not remove, Cash on Delivery option. 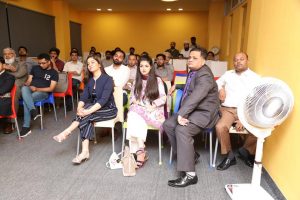 South) of CallCourier suggested a possible solution to the above problem by advising to create such a body which can control activities of logistics. Adam Dawood, CEO of Yayvo, believes all logistics should collaborate and work together. Jaseem Ahmed Shah also raised the issue of the fake sellers in which the logistics companies are defamed instead of the seller. In his perspective, an action should be taken to prevent this from happening. Mixed responses were received from the audience on this topic.

Our Country has recently entered the e-commerce world and it will take a while for the e-commerce startups as well as the general population to understand and make the best of it. Events such as Ecom Connect Meetup are vital for this system to flourish.