CarChabi is an IoT startup promising to enhance lifestyles by an innovative Android smart phone app comprising of a digital automobile key. CarChabi was founded on 1st of December, 2015, by Muhammad Ali Rashid along with Hammad Siddiqui, both are electrical engineers by professional. The idea of CarChabi struck them while they were working as graduating engineers and the operations of this startup began in January 2016. Since then it has been a successful endeavor. The idea behind CarChabi was to bring ease to peoples’ lifestyles and upgrade their mundane driving experience.

CarChabi boasts impressive features which include; locking and unlocking automobiles without the use of a key, controlling features of car for example cars radio, music system, horn, A/C, heater, power windows, gear lock, trunk, starting or stopping engine, providing security as no other person will be able to access the car and having a range of 300 feet of Bluetooth connectivity. It is easy to install the app and use it.  CarChabi costs PKR 5k and comes with a hardware device which is installed in the car by any car electrician and a detailed manual. The software can be downloaded from Google Play Store. The IOS version will be coming soon. The app on the phone and device installed in the car will work via Bluetooth. Since its start, it has sold 1000 units of CarChabi devices and generated $30k. 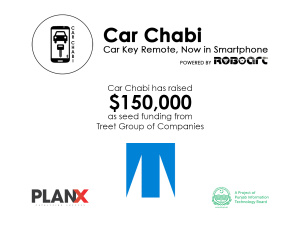 CarChabi has had a series of achievements since it has started operating. They were nominated as the Best Startup in 2nd Throw-a-thon at LUMS. They were selected as one of the Top 12 Startups at TIE Lahore and graduated from Plan 9, a project of PITB. CarChabi is currently being accelerated at PlanX, the nation’s largest technology accelerator. The PlanX team connected them with a fellow enthusiast about automobiles and technology, Syed Shehryar Ali, Executive Director at Treet Group of Companies. Mr. Shehryar quickly grasped the concept behind CarChabi and saw potential in this startup. This led to CarChabi raising a seed round of $150,000 led by Treet Corporation Ltd. CarChabi startup will utilize this amount to expand their team and further allow them to conduct researches for developing new products. Mr. Hammad Siddiqui COO of CarChabi has confidence that automation of products will prevail in the coming years and what was considered a luxury once has now become a necessity. Now CarChabi has come under a parent company ‘RoboArt Pvt. Ltd’ and it will continue to operate from there and work in the field of IoT to develop products for a larger population.

Dr. Umar Saif, Chairman of PITB, MITEFP and Vice Chancellor of ITU, believes that Pakistan has ample of raw talent and now local investors to back these projects. He deemed CarChabi as the first investment news of the year in a hardware startup. CarChabi was developed to bring convenience to its users by not only integrating an app to a smart phone but by also making the pockets light with the exclusion of keys. CarChabi, along with its diligent team has a potential future in Pakistan as this country has just begun to provide platforms to new startups.