TiE Lahore hosted an event Fireside Chat with Khurram Zafar on Pakistan’s Startup Ecosystem: Myth or Reality? at Royal Palm from 3:00 pm – 6:00 pm. TiE Lahore Chapter (www.lahore.tie.org) is an International, non-profit organization fostering entrepreneurship with 61 chapters in 18 different countries and 13,000 members worldwide. Mahrukh Ali of Instaprint kicked off the event by introducing the man himself. As Mahrukh iterated, “Khurram serves as a Director of Karandaaz, Managing Director of 47 Ventures, and head of LUMS Centre for Entrepeneurship. His strong work ethic lead to him to receive an award as his time of CIO of the Stock Exchange in Pakistan”. She also managed to introduce Faisal Sherjan, as someone “who was namely associated with the Jang Group in the realm of award-winning strategy, alongside acting as an investor or mentor for Patari, BookMe, XGear, and Travly”

TiE has always focused to bring new and relevant topics for entrepreneurs and this time was no different, the topic threw light on the challenges faced by startups and their brand development. The talk aimed to bring together business professionals, thought leaders, industry innovators, learned academicians, aspiring startups & enthusiastic entrepreneurs to highlight key themes for business development and success.

Mr. Khurram Zafar was the speaker for the event. He was introduced as the Director for Karandaaz Pakistan. Previously, he was serving as an Executive Director for LUMS Center for Entrepreneurship (LCE) and Innovation Fellow at Pakistan Innovation Foundation. He worked as the Chief Information Officer at Lahore Stock Exchange where he was awarded the best private sector CIO of Pakistan by P@SHA. He has also served as one of the founding board members of Plan9, a technology incubator of Punjab Information Technology Board and adjunct faculty for entrepreneurship at Information Technology University (ITU). Mr. Zafar is a known figure of Fortune 500 and a Venture Capital Consultant. He is also an angel investor with an interest in the technology and agriculture sector and has been an adviser to several Venture Capital firms in the United States.

Faisal Sherjan was the moderator for the event. He is a former media professional with 25 years of experience in TV, new media & telephony, was the speaker for the event. Mr. Sherjan is an enthusiastic entrepreneur and co-founder, mentor and chief strategy officer for various startups. Currently he is serving as the Director of LUMS Center for Entrepreneurship (LCE).  His Talk reflected his experience in the field and generated interesting insights and ideas for entrepreneurial ventures. His moderation was an informative addition to the Talk and was highly appreciated by the audience. 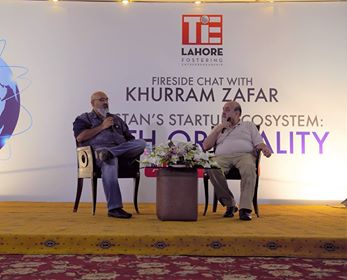 There were many notable entrepreneurs and esteemed members of the tech community present at the event, including, but not limited to:

1. What is different now as opposed to the last 5 years in starting a business?

More regulations have come into place and kickbacks have been given to tech companies, namely a 3 year tax holiday

2. The Internet has created a lot of opportunities. Where do you see the ecosystem now? Are we in the discovery stage or are we not?

A lot of people are trying to launch their own businesses these days. Studies in the States show that 85% of returns come from 15% of investments made. We have made discoveries in this regard. One example is EasyPaisa. I told Indian entrepreneurs about the concept – and we can safely say that India is a very developed tech ecosystem. They were surprised at developing tech out of cornershops in a market like Pakistan to facilitate payments

3. Entrepreneurship is all about ‘failure’. However, corporate investors always look for a good ‘track record’. Would you consider 47Ventures to be in a bit of a pickle in that regard?

Finally, what would you say are the three things that are needed to help startups grow in Pakistan

1. Help to support their vision as much as possible through funds, incubators, accelerators, and angels.

3. Help eliminate the ‘holier-than-thou’ mindset of entrepreneurs over here. Humility is the key to success in a market like Pakistan

You may watch the entire FireSide Chat through this video: