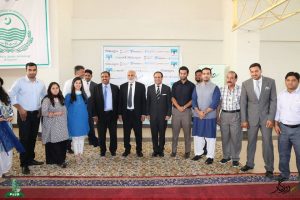 Dr. Umar Saif has been a staunch supporter of the e-Rozgaar centers therefore in his honour the center at UET, Taxilla, has been named ‘Umar Lab’. The event began with the ribbon cutting ceremony by Dr. Umar Saif. 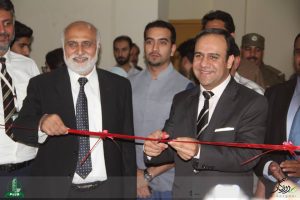 He took this opportunity to address the candidates and proclaimed,

‘Online freelancing can open multiple avenues for the youth to market their technical and non-technical skills.’

He also added that the program would take forward the economy of Pakistan by gearing up self-employment as in the given circumstances we produce 250,000 graduates annually against 50,000 job opportunities, and this is not enough to meet the requirement.

The rest of the event followed in the Sports center of the university which was temporarily converted into an auditorium. A remarkable number of 400 people attended the event. Vice Chancellor Prof. Dr. Niaz Ahmed Akhtar expressed how immensely proud and honored he felt that UET was chosen to be the first center in Northern Punjab and advised his students to value ethics and morality over anything else in life.

Dr. Umar Saif praised the interest displaced by the faculty and administrations of UET, Taxila in making this center a reality. He explained to the audience how 1.5 crore rupees are exported as skill from Pakistan and how it can contribute greatly to the growth of the economy if properly utilized. 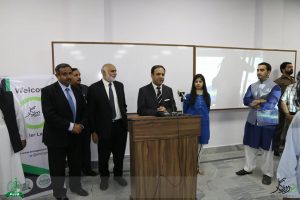 Currently 3 centers have been established out of 40 centers which are to be established in 36 districts of Punjab. Out of the 40 centers, 5 centers are reserved solely for female candidates. The purpose of these e-Rozgaar centers is to enable the youth to generate income approximately from Rs. 40,000 to Rs. 80,000 per month while working from home. 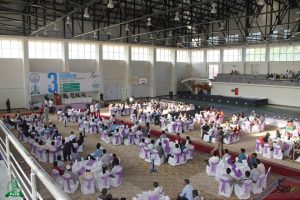 The centers have three phases for freelance self-employment in technical, non-technical and creative areas. The training period comprises of 3 months under high profile trainers. These centers five centers are dedicated for female candidates. In the first phase 10,000 candidates selected on merit through a transparent process, will be trained in three different batches during the current year. These Centers are being established in eleven universities of the Punjab.

3046 candidates appeared for the entry test from Rawalpindi and out of these 300 have been shortlisted for UET, Taxila. There are four centers scheduled to be opened in the Northern region of Punjab in the future.  PITB received an enthusiastic response by registering 33105 applications from the young graduates. The application data reveals that 16 Ph.D., 1794 MPhil, 15574 Masters, 15143 graduates and 578 B.Tech (Honors) applied for this program. Applications were received from all over the province.

The event was concluded with the presentation of token of gratitude to Dr. Umar Saif, DG e-Governance Sajid Latif, Director Entrepreneurship Nabeel Qadeer and Program Manager Mehak Jamal, by The Vice Chancellor. a token of appreciation was presented to the Vice Chancellor by Dr. Umar Saif. An iftaar arrangement was made for all guests after the event. 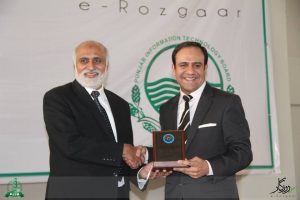 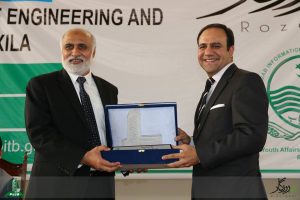