This Sunday, October 7th 2018, history was made when a startup BatteryLala raised an investment of PKR 4 Crores in Episode 3 of Pakistan’s premier startup reality show – Idea Croron Ka Season 3.

And this is not it. It was the first time ever that a “female” investor, Shahida Saleem (Lead, Impact Network) was featured on the show and invested in a startup.

Battery Lala is an ecommerce platform dealing with batteries of all kinds. Their inventory include UPS batteries, car batteries and solar batteries to name a few. They claim to ensure installation within four hours of order placement. However, at this time BatteryLala is only operational in Islamabad and plans to expand in other areas of Pakistan. They remain undisputed in the market because courier companies do not transport acid based products.

“In the next five years I see BatteryLala as the next Daraz in the niche of batteries” said Qamar, Founder and CEO, BatteryLala as he puts forward his ask of Rs. 100 million (Rs. 10 Crore) against 30 percent equity.

Nabeel A. Qadeer – lead, content producer and host of the show, left the audience with an inspiration to look up to and brought up the four faculties any entrepreneur must have to breakthrough. He exclaimed:

“In my entire experience with entrepreneurs on this show and otherwise, this is one of the best pitches I have witnessed. This is what we call a true entrepreneur.” Addressing Qamar, the founder of BatteryLala and the investors he continued: “You are an inspiration for a lot of entrepreneurs who are watching you right now.  From passion, to the knowledge of the domain, focus and desire to go big, Qamar fulfils every criteria of an entrepreneur!”

The investors also endorsed this remark and an instant investment battle between them sparked. Naeem Zamindar, Founder and CEO Zamindar Capital, started the round with asking for 15% equity against 2 crore rupees. This was immediately countered by Shahida Saleem, Lead Impact Network, who demanded third party valuation and offered Rs. 4 Crore investment. 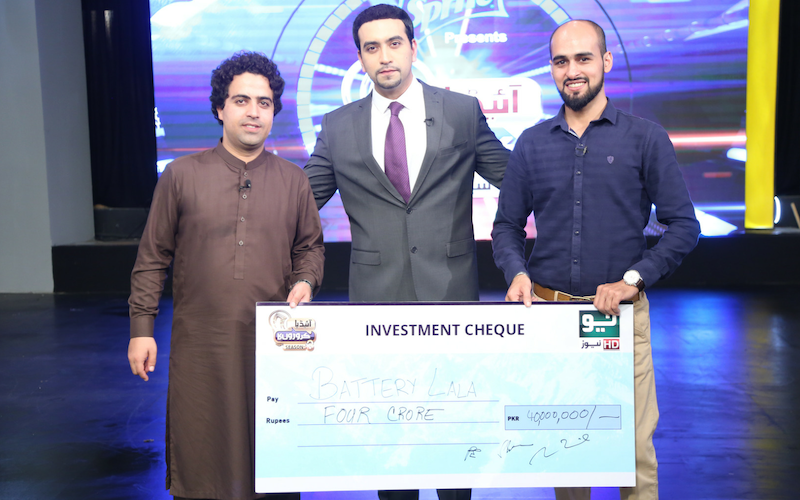 The negotiations led to a total of Rs. 4 crores split between Shahida Saleem and Naeem Zamindar with sweat equity from Badar Khushnood, VP P@sha, Co-Founder Bramerz.pk and Fishry.com! This marked the biggest investment ever raised on a TV show in Pakistan.

Idea Croron Ka, Pakistan’s first startup reality show supported by CMACED and Superior Group, now in its Season 3, has made huge successes in the a short time span of a year and a half since its inception in January 2017. Not only does it have international organizations as its partners such as Facebook, USAID, Amazon and Turkish Airlines but has also premiered internationally in US and Russia.

This is only the third episode of this season and the excitement has just begun!

The episode also featured pitch of one more startup, Maqami.com and a superhero Saad Mohamed our very own desi mountaineer. Watch the complete episode here:

Watch Idea Croron Ka every Sunday at 7:05 pm on NEO TV Network and stay updated with the latest happenings of the show at: